Good morning,  I’ve reached back in the archives for a couple of analog photos that I took during my Navy Years (1968). During Vietnam I was deployed on a carrier that  traveled to Japan, Hong Kong and Singapore. In one of those places I encountered this Buddha Sculpture in a park. It is rendered in Sepia tones because the dyes in the transparency had faded away over the years.

Before I was deployed on the ship, I was stationed at Imperial Beach NAS in California. On weekends I would catch a bus and head to San Diego or the beaches up the coast. One one urban exploration I took the photo of the street sign. of the Strip Club, however I cannot verify the veracity of the advertising.

In 1972 after my Navy stint. I traveled up to Canada and visited Nootka Island. These photos were taken at Friendly Cove.

The Europeans is a 1979 British Merchant Ivory film, directed by James Ivory, produced by Ismail Merchant, and with a screenplay by Ruth Prawer Jhabvala, based on Henry James‘s novel by the same name.

I took a few photos at the Center Cemetery and was yelled at by the film crew for shutter noise (didn’t stop me though). My current camera has a silent electronic shutter. I had a brief chance to speak with Robin Ellis (who was born in Ipswich England) about his role in Poldark which was a series that we enjoyed on PBS.

When I was in the Navy, I didn’t own a car until the last year of my 4 year stint. I was dependent on buses and friends for transportation.  I had friends in California who gave me a ride for a day in the mountains outside of San Diego. I cannot remember the exact location but the landscapes were stunning.

I was intrigued watching the clouds pour over the ridge line and vaporize when they hit the warmer air. This is one of the few photos I have of the day.

When I was stationed at Moffett Field NAS in California I had the opportunity to catch training flights to various locations. It was a pretty good deal.  I was an Avionics technician and my job was to fix anything that was broken. I was in an  anti-submarine squadron and they flew Lockheed P-3 Orion aircaft, a turboprop with 4 engines and a “donkey dick” magnetic anomaly detector portruding from the rear.

These planes were based on the Lockheed L-188 Electra commerical airliner but without very many seats. On some of these flights I would attempt to sleep on the heated floor beneath the radar consoles.

I’m not sure where this photo was taken, it might have been Spain, Puerto Rico or Panama. I foolishly didn’t catalog my photos. I took this photo with my trusty Nikkormat SLR which accompanied me for most of my service time.

Good morning readers, did you have your coffee yet?

The winter continues to be weird here in New Ipswich. It’s January 10th and it is raining, not snowing. Temperatures are comfortably above freezing. It’s not natural.

The photo theme for today is Beach Sunday. I’ve gone into the archives and picked a few analog photos that I took on the West Coast when I was in the Navy. In retrospect I wish I had taken notes about the exact dates and locations for these photos, I can only guess.

Click on any photo to open the Beach Album of photos.

After the Navy I drove cross-country from California to Connecticut.  These are densely populated areas and it was quite a surprise to see so much sky and open spaces. I wonder if these folks ever got a bit lonely.

If you gotta go, order a Squatty Potty from Amazon.com

I dug into the archives for this pick for the photo theme #SignSunday. When I was in the Navy in the 1970s I was stationed in Imperial Beach, CA.  We took a road trip to Las Vegas to win big money. On the way we took a pit stop and as soon as I saw this sign,  I knew I had a photo for the ages.

I decided not to test the sign’s veracity and opted for beer.

When we took this trip the Jerry Reed song When You’re Hot You’re Hot  was in the top of the charts. We sang it all the way to Vegas, but not on the way back. To save money for gambling we didn’t bother with a motel. We slept in the desert out of sight. My buddies slept in the car but I curled up in a sleeping bags on the ground. I learned a few things that night. I learned that the desert is really cold and I learned how stupid I would have felt if a snake or scorpion had joined me (they didn’t).  I remember that we stopped into Caesar’s Palace the next morning to rid ourselves of any money that remained and meeting Liberace (I am not making this up). We looked great, just as you would expect from a couple of sailors who had slept in the desert.

At least I didn’t drink this water.

Battered by savage storms on their voyage from Hawaii and seeking a place to make repairs and to find fresh water, Captain James Cook with his ships Resolution and Discovery, limped into this bay on March 29,1778. While the British anchored their ‘floating islands,’ the First Nations people shouted from their canoes: “itchme nutka, itchme nutka,” meaning “go around, go round” to a better anchorage at Yuqout, but Cook misinterpreted their shouts, believing they were calling out Nootka as the name of the area. Despite this initial misunderstanding, he and his men stayed for more than a month here, becoming the first documented Europeans to set foot in British Columbia. – Yuquot (Friendly Cove) Today

Of course it did not fare well for the First Nation People once the Europeans started showing up and claiming everything for their own. 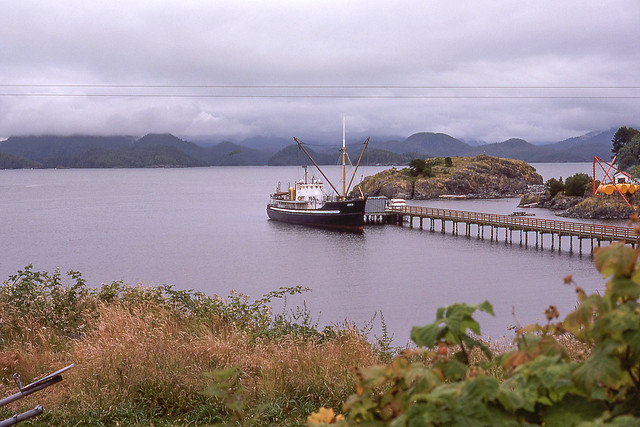 The MV Uchuck III is a converted 1942 Minesweeper that services Nootka Island and multiple camps and settlements in the area. It carries freight, passengers and kayakers. This photo was taken in the 1970s but not much had changed when I returned in 2004. 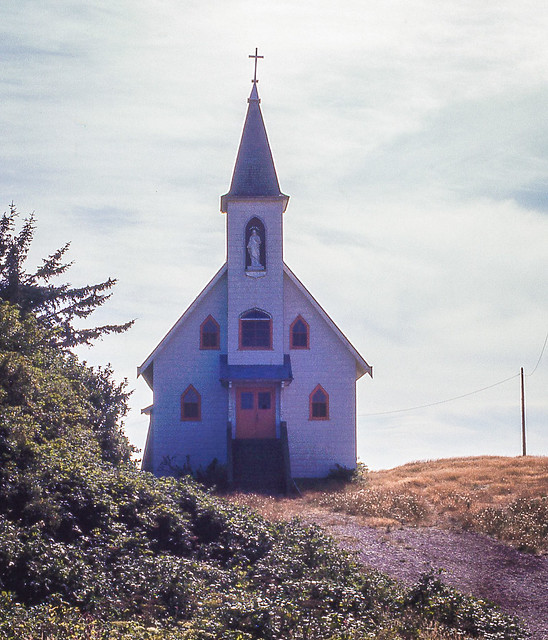 The first building one encounters is a Roman Catholic Church built in 1956 to replace the one built by Father Brabant in 1889. 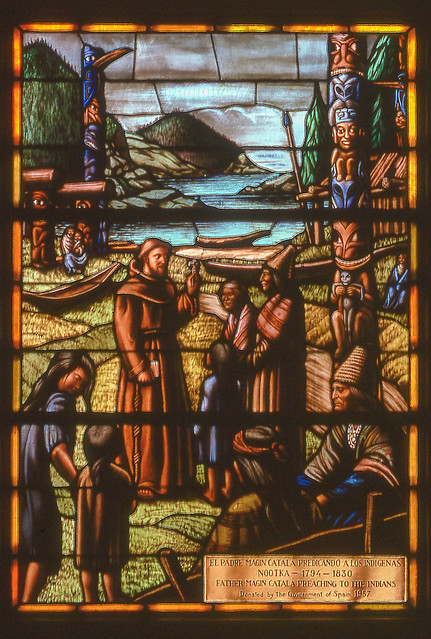 Stained glass window in the church 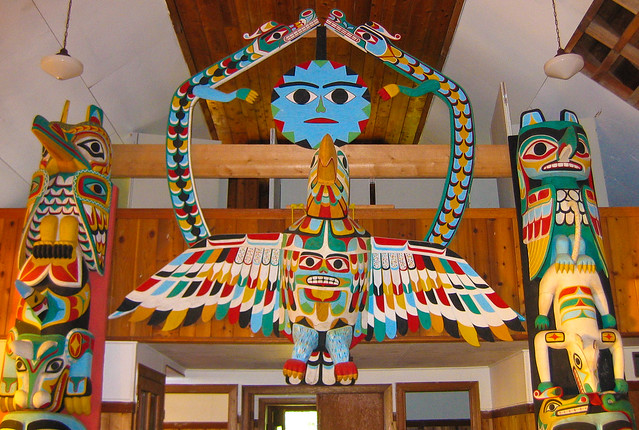 The real surprise is the interior of the church which now serves as a cultural center.  The altar and pulpit have been replaced with colorful native houseposts. Tucked away in the choir loft we found a few church remnants out of view. 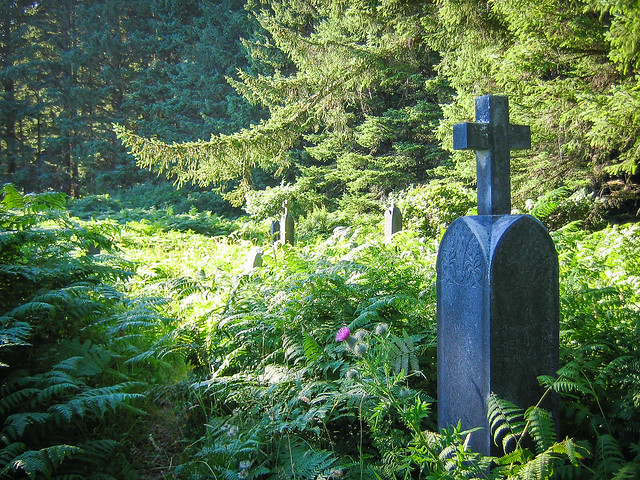 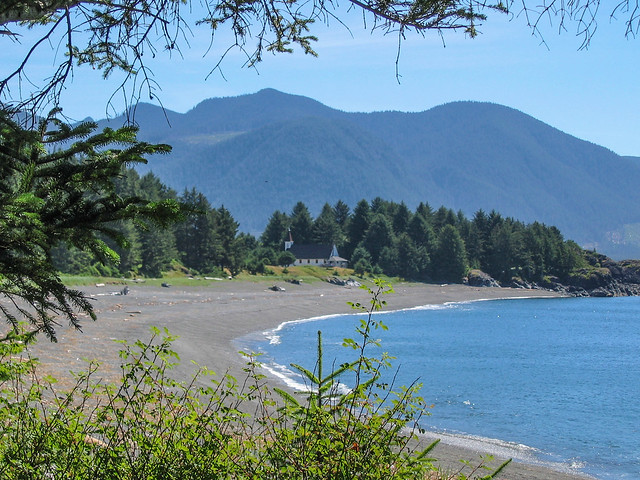 Looking back at the Church along Friendly Cove. The beach is deceiving, it is not sandy, but made up of small polished stones. Walking along the shoreline is similar to walking on ball bearings. 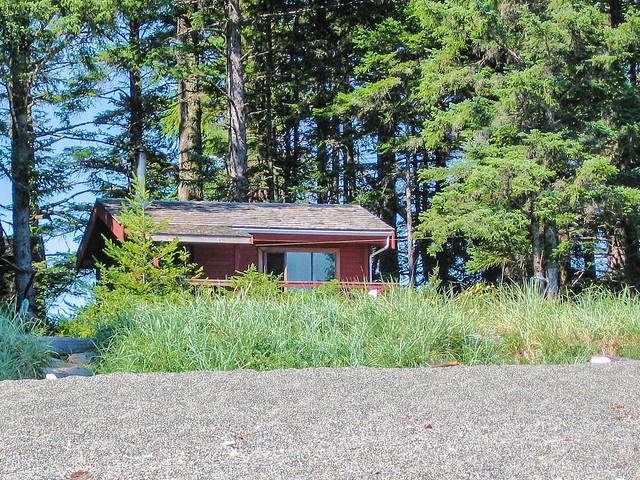 We rented a cabin at the far end of Friendly Cove. We were unable to fasten the door because an earlier earthquake had shifted the frame. This was an issue because we were nervous that we might get a visit from a bear. We dined on fish the entire week. 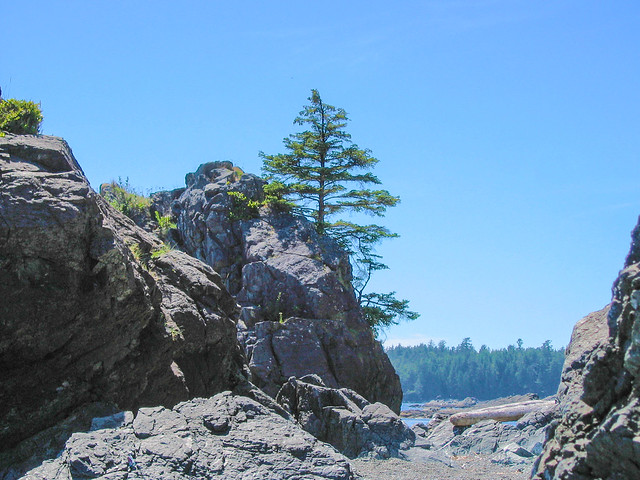 Our friends were hiking the trail while we stayed in the cabin. During the day we explored some of the tide pools and socialized with our relatives. 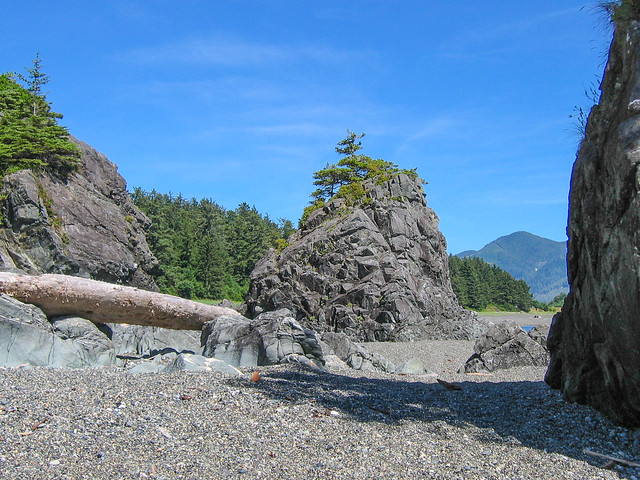 It is an incredibly beautiful place

Your purchases at Amazon.com help support this blog. Thank you.
Good morning,

I dipped into the archives for today’s #WindowWednesday photo theme. I was stationed aboard the USS Bon Homme Richard aircraft carrier during the Vietnam War. One of our ports of call was Hong Kong in 1970. We anchored in Victoria Harbour and rode this water shuttle when we went on liberty. 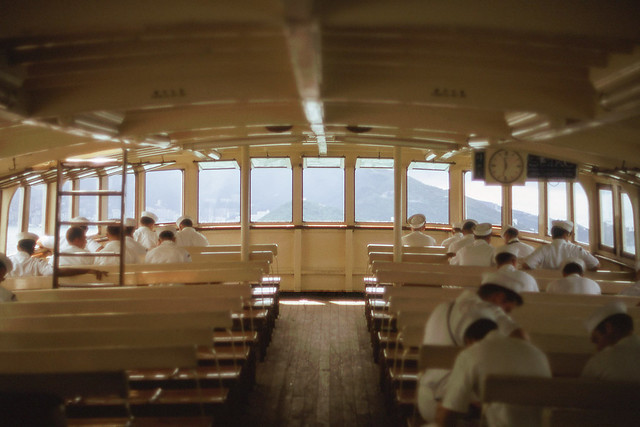 Hong Kong has a highly developed public transportation system, so getting around was not an issue. Riding the Star Ferries is something any visitor should experience as a way from getting back and forth to Kowloon and Hong Kong.